Dos and Don’ts of Japan 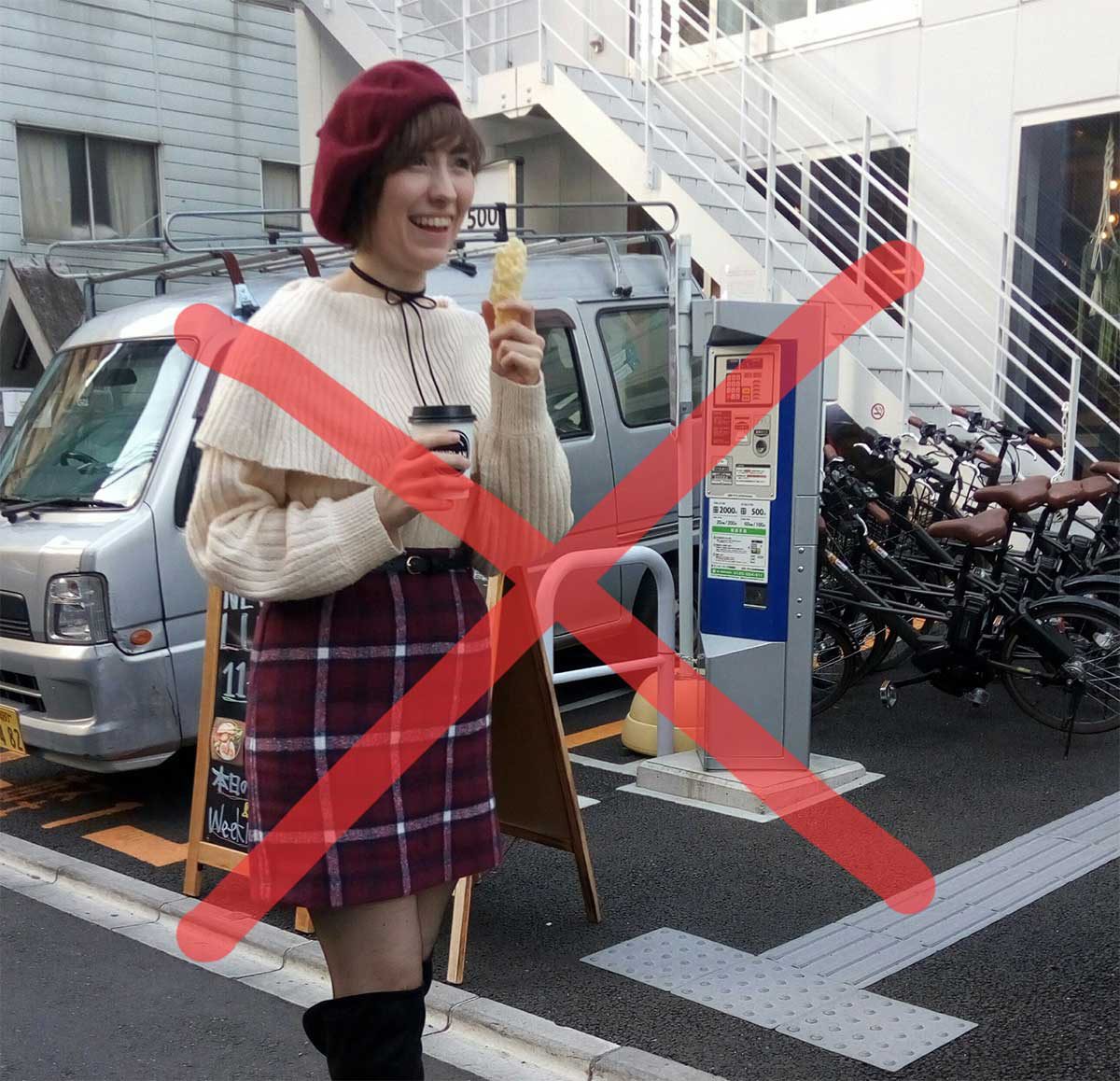 Hello world!
Welcome to UNPLAN’s blog. This is Delice, one of UNPLAN’s receptionists.
Japan is a culturally rich country with a very, very long history. Because of this, there are many traits to its culture that are completely unique to Japan, and may be almost overwhelming to those visiting for the first time.
Today I’d like to introduce a few Dos and Don’ts of Japanese culture that should come in handy to anyone planning a visit to Japan in the near future!
Let’s start off with the Dos.

Here’s an example: You go to a supermarket in Japan and you want to walk down one of the aisles, but there is someone blocking your way. There isn’t enough space in the aisle for you to walk behind the person, but there is plenty of space for you to pass by if you were to walk in front of the person. In this case, it is okay for you to pass in front of that person, as long as you show some form of apology to them (bowing your head, for example).
Another example would be walking between two people having a conversation inside of a busy train station. It’s okay for you to walk right in between them, as long as you make sure they know you’re sorry for doing so. But make sure that the train station is extremely crowded, or else they might feel like you walked in front of them just to annoy them.
Many of Japan’s big cities (especially Tokyo!) are highly populated, so Japanese residents have found ways such as this to make their cities easier to live in.

It’s okay to slurp your noodles

If you’ve ever walked into a crowded ramen restaurant in Japan, you will probably notice how noisy it is with the sweet sound of noodle slurping. Coming from a country where I grew up being told that it’s rude to slurp your noodles, this drove me absolutely crazy for the first few months I lived here. However, in Japan, slurping your noodles communicates to the chef that their ramen is tasty.
But don’t worry if you forget to slurp your noodles when you’re in Japan—most Japanese people are aware that slurping noodles is not common in other countries, and some Japanese even believe that foreigners don’t know how to slurp noodles. 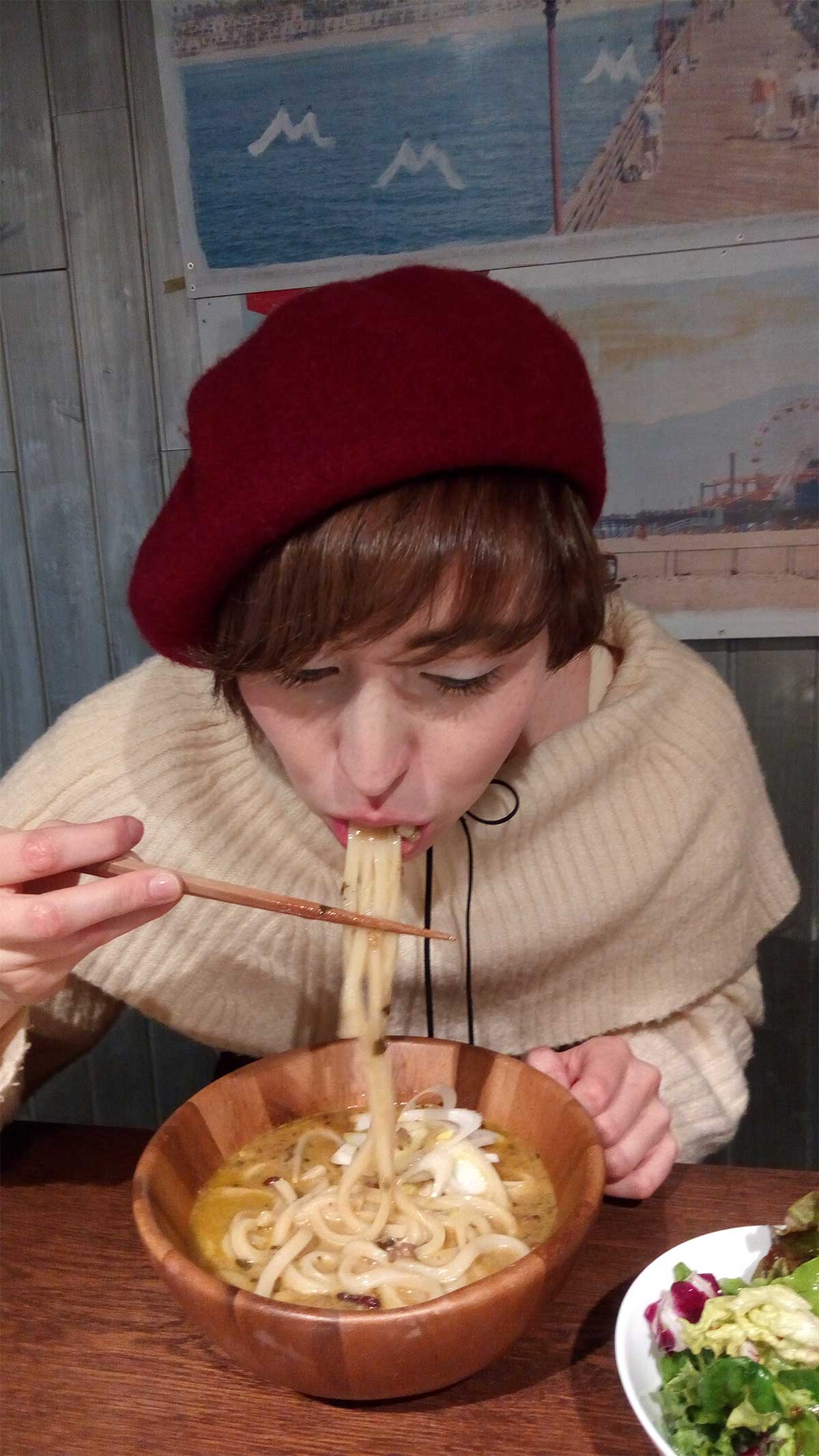 In Japan, you should always bring a small gift when you are invited over to someone’s house. One common thing to bring to someone’s house is sweets. Or if you came from another country or even another prefecture inside of Japan, it is common to bring a souvenir from the place you came from.
Make sure to bring enough for every family member living in your friend’s house. If you decide to bring cupcakes for your friend who lives with his or her mother, father, and two sisters, bring at least 5 of them. But be careful never to bring 4 of anything. In Japan, 4 represents death, so even if your friend has a family of 4, bring them at least 5 cupcakes. 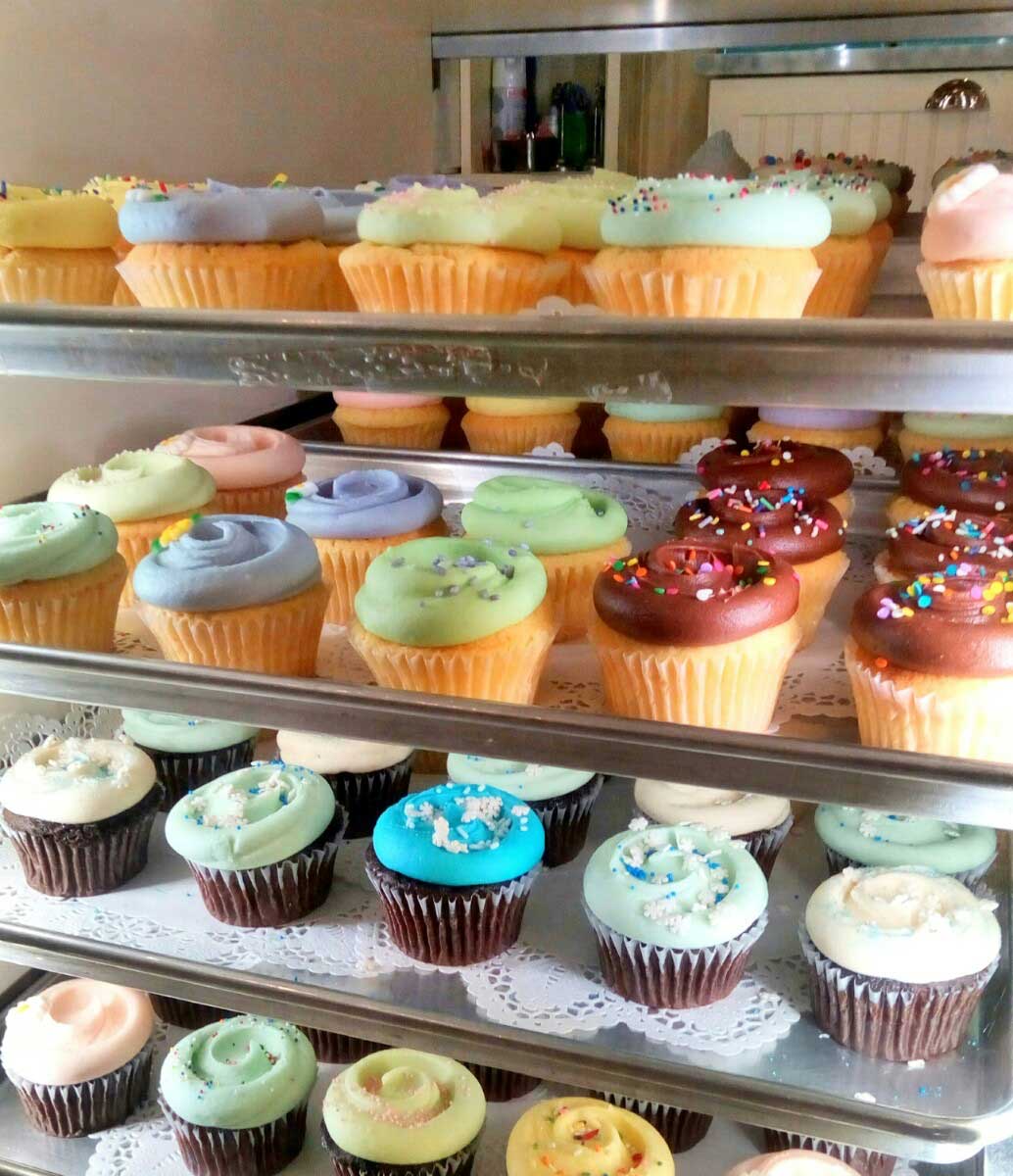 Don’t forget to take off your shoes

In Japan, people take their shoes off when going into a house, Japanese-style room, or even some restaurants. Usually these places are marked with signs. If they’re not, they will have a “genkan,” a Japanese-style entrance, where there will be a step up to enter into the room, right in front of the entrance. If you’re not sure if you need to take your shoes off, take a look at other people to see if they are barefoot or wearing slippers.
Even if you forgot something and just need to go back inside the house for one second to get it, and even if your shoes are not that dirty, take them off. This custom is practically carved in stone in Japan; so if you don’t want anyone yelling at you, take your shoes off. 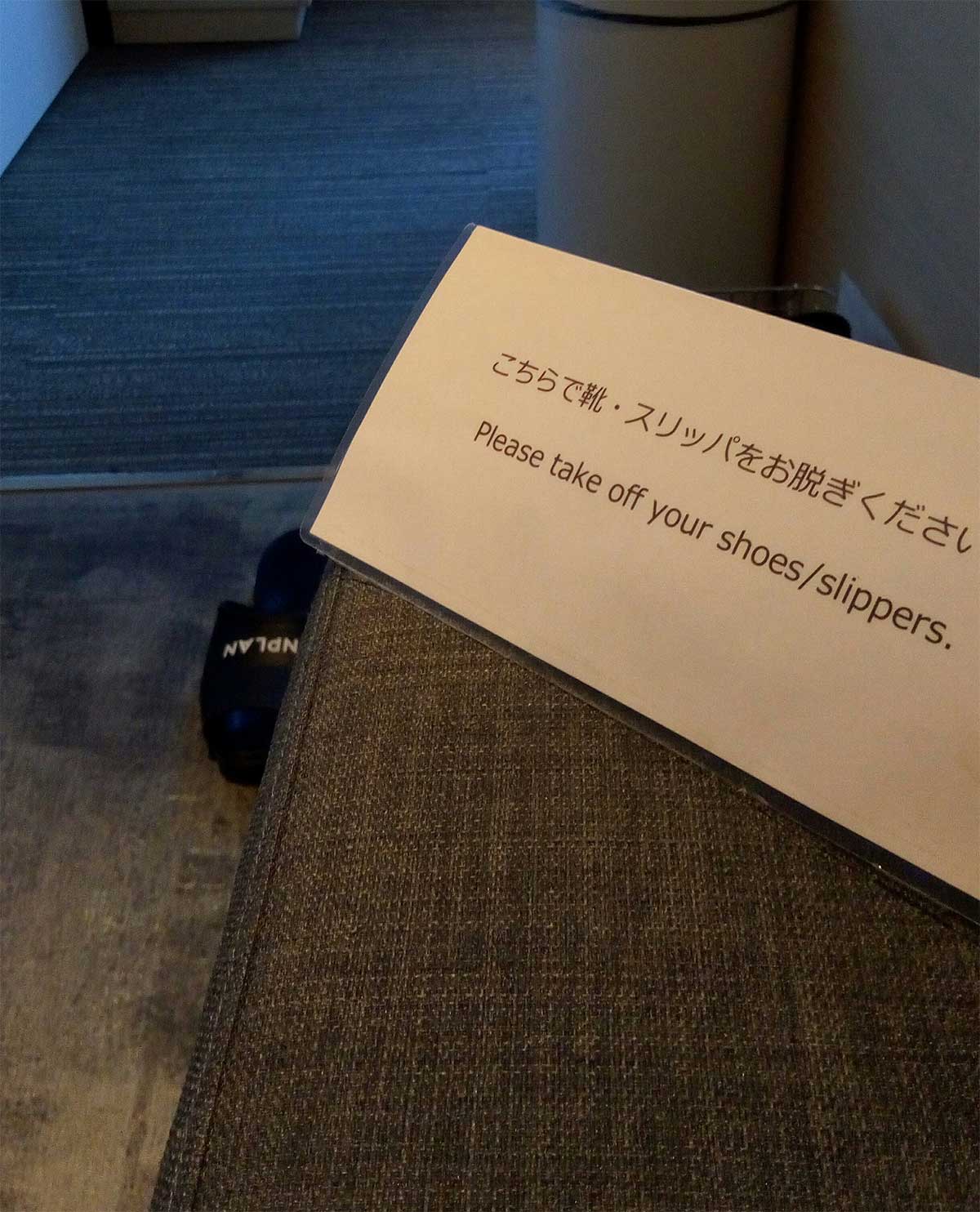 Don’t talk on the phone on the train

If you’ve ever ridden a train in Japan, you will have probably noticed all the signs telling you not to talk on your phone. This is considered very rude in Japan, and is one thing you should always avoid. Even most busy salary men will refuse to answer a business call before getting off the train.
I’ve asked my Japanese friends several times why they think talking on the phone in the train is so rude in Japan. Almost everyone answered that the Japanese feel uncomfortable when they can’t understand a conversation because they can only hear one side of it. Another reason I’ve been told is that trains in Japan are usually fairly quiet, and talking on the phone would be disruptive of the people around you enjoying their quiet time.

Eating while walking outside is frowned upon in Japan. In fact, eating almost anywhere other than a designated eating area is frowned upon. If you’ve ever taken a stroll outside in Japan, you’ll probably notice that nobody is eating anything. It’s also very rare for the Japanese to walk outside holding coffees.
This is one of Japan’s cultural “rules” that I still can’t get used to. I still sometimes walk to the train station while munching on some bread from a convenience store on days I didn’t have time to eat at home. These days, it’s mostly only older generations of Japanese who are really bothered by this, so most people aren’t going to glare at you if you walk by them with food in your hand. But it’s always better to be safe than sorry. 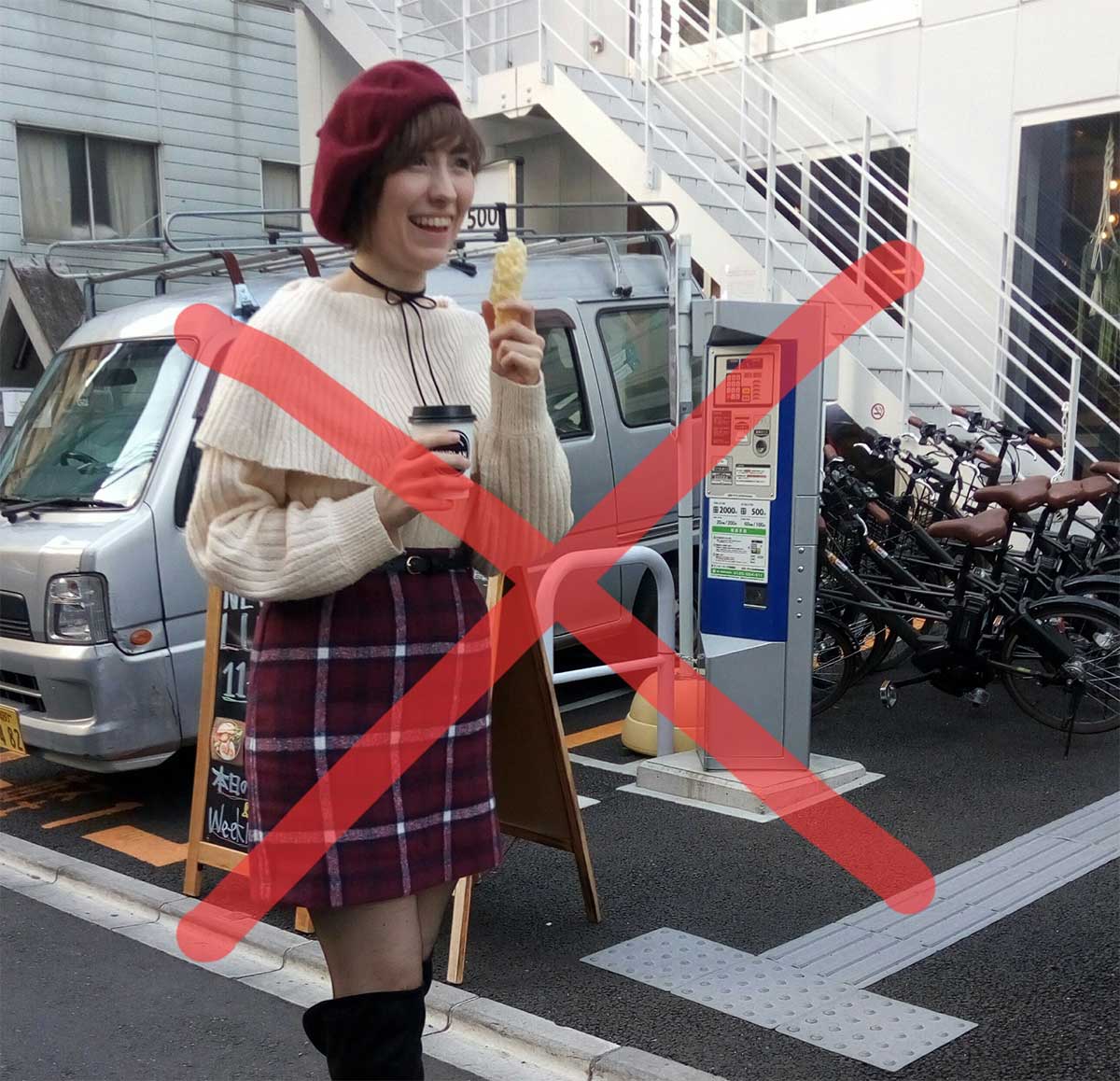 These are just a few good things to keep in mind when you visit Japan. Hopefully you’ll find these useful at some point during your trip! And don’t worry if you forget a thing or too—most people will forgive you ☺
– Delice